What's on your mind?

If you ever get this, please add me on Discord - Armala#1337

Folks have recently started to write more info about guilds on the site, that's fine, I'm happy that you folks share your enthusiasm!

However I don't think the pages that are about specific guilds belong to the main namespace of the site, as they're not strictly game content.

So I suggest we create a new namespace (Guilds) where we can list all the guilds, and where guilds can setup their page.

We'll move the pages about guilds that are currently in the main namespace to the Guilds namespace. 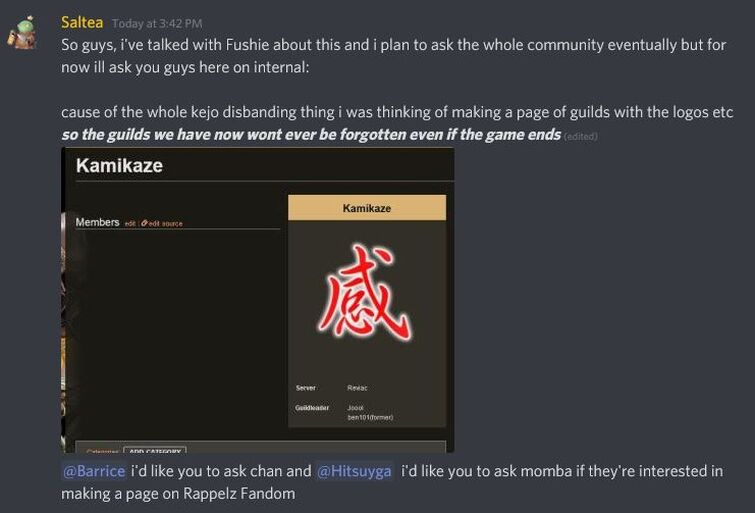 If anyone's still here. I'm interested in making pages for all Guilds which is outdated atm. I'd like some help if anyone's free aswell cause I'm still starting out :)

@BlueMystical I was just saying Nobody is here anymore, Also Sorry i didnt reply to your comment whenever you posted it (Im not online on the weekends <3). i usually reply right away, but i get why you reacted like that because you do all the work. i appreciate the work you do on here and im sorry im just saying theres barely anyone on here. Anyways Have a good day and keep working hard! :)

In The Place Of The Day

I'm currently the only user "with privileges" active on the site (for at least the last 8 years). I have the administrator ("sysop") privileges, which allows me to do a bunch of stuff normal users can't, which is great for managing the content, however...

I'm missing the privileges to give other users privileges, and this would be allowed by getting the bureaucrat user rights.

Is there any tips or tactics for a Gen Point Vendor for 1,000,000 Gen Points as a buying Mystic Koala?

I have lvl 167 deagon and not sure which weapons should I put into it. Also is there a better pet for a magician?

Looking at the list of Card Abilities, we have, for instance, four pages for the Vitality stat, each with their different (Tier X) suffix.

Like many of you I played rappelz when it was under Gpotato... Recently I have missed re-playing rappelz.. As I have grown older I have moved on from best graphics to best content type of game and to me rappelz is one of those.

So i have restarted playing and loved it at first. But then I met a player that told me what was new and rushed me in 1H to level 90. Something that should have taken time and hard work in the past... And I hated every minute of it.

To me Rappelz was :

- Always work on your gear

And now with those buffs available to players to be able to solo play, it had lost what I loved BUT here is where Webzen has been smart... It's a buff so we have a choice, we can still play as close to as it used to be by not taking them.

I understand that because the population is so low they had to come out with something but to me at least it's not what I wanna play.

So I am looking for though players, that remember that nothing was given to them in rappelz, that from level 20 to 70 you had to work hard for it and enjoyed crushing the mobs...Is anyone up to take this rid with me ?

In the past, we used to track events. We also added terms like "with the new Epic X.Y" or "XX is a new feature added in Epic X.Y" some time ago; the "new" is not new anymore. We're also tracking some removed features.

Do we need to keep all of this?

I'm inclined to remove all of this because:

I'm in the process of updating the Pets pages so that they use the appropriate icons.

I'm also removing the concept of numbered tiers for the pets, as it's not a concept we see in the game; replacing it with the Rarity:.

The Wiki related discussion category is intended to discuss anything about the wiki, whether it is about improving some sections, or help with templates, tables, etc.

Whether it be strategies, builds, quests, etc, the Rappelz related section of the Discussion is all about the game!

The forums are now replaced by the Discussion feature,

We sacrifice a bit of freedom in post writing for clearer discussions!

Feel free to discuss about anything in the General section, while the two other section are really topic specific.