Gamble for a Silver Box at the Altar of the Goddess

The Cerberus pet was introduced with the Epic 5 update. It is a Tier 5 (Special Rare) creature. It specializes in physical attack and physical accuracy. The Cerberus' Damage Dealing potential is very high, although it is the least valued out of the Tier 5 pets, due to its very low HP and defensive capacities, it's skill set being inferior to the Genie and Ifrit, and the Physical Accuracy part of its unity serving not much purpose on Player vs. Enemy combat and being virtually useless on quite a few classes, even amongst the melee classes. Still, it is not to be taken lightly, as it's Damage Dealing surpasses creatures like the Kentauros and is almost on par with the Genie and Ifrit. A pet with some obvious flaws, but still very appreciated in Dungeon Parties for it's very noticeable contribution to the group's killing speed.

With the new Epic 7 part 2 (30th March 2011) update, the Cerberus pet has seen a significant increase in usefulness and demand. Namely due to fact fact that the recent Vielded Island and Dimensions quest-lines require the hunting of various high leveled bosses, there is a growing need for tanks to have high accuracy and fast killing speed.

Cerberus cards may drop from level 1-200 monsters and all boses. 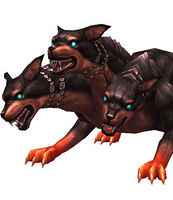 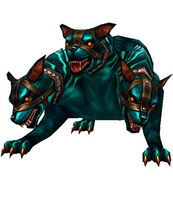 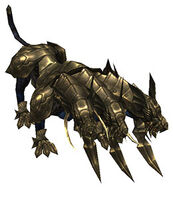 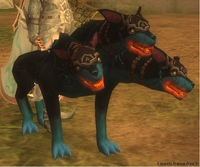 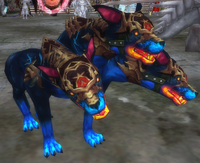 Retrieved from "https://rappelz.fandom.com/wiki/Cerberus?oldid=75913"
Community content is available under CC-BY-SA unless otherwise noted.