Already tamed, see Ice Maiden Quest Line
The Ice Maiden was added to Rappelz as of Epic 7 part 2 (30th March 2011). She is a female character who stands on a floating platform of ice. Her first evolution sees her as a child trapped in a floating block of ice. She is a magic-based damage-dealing pet with a unity which grants m.atk and cast speed. The Ice Maiden comes tamed as a quest reward.

Although they don't look particularly flashy, Ice Maidens boast an incredible amount of damage dealing potential. An unstaged Ice Maiden boasts the second highest damage output (for a mage pet) when compared to the rest of the unstaged mage pets.

Their weakness is low survivability and lack of crowd control. They excel in 1 on 1 fights against mobs but cannot last long if multiple mobs attack them.

Prior to Epic 7.3, the Glacier Smash skill would randomly cause the Rappelz game client to crash without error or warning which was a particular annoyance in hardcore dungeons. Epic 7.3 has reportedly fixed that issue, although some players still disconnect when Glacier Smash is used. 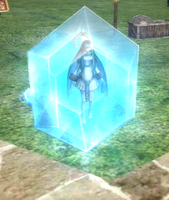 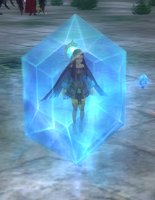 Retrieved from "https://rappelz.fandom.com/wiki/Ice_Maiden?oldid=76777"
Community content is available under CC-BY-SA unless otherwise noted.