The Mystic Koala is a unique pet with high defense power and special buffs.

A Mystic Koala card can be bought at a Gen Point Vendor for 1,000,000 Gen Points. There is also a small chance to receive one from a Bear King's Gift Box or Bear Prince's Gift Box. Although viewed as incompetent due to its humorous styling and lack of active attack skills, the Koala is one of the most effective tanks in Rappelz. Much speculation has occurred as to whether the Koala is deserving of its Tier 6 status. Although boasting exceptionally high base Vit and Str, its lack of a second DD skill truly diminishes its ability to effectively hold aggro, and it depends more on generating aggro from his skills (a few of which will give him a 100% threat increase). On paper, a Koala's damage output is about the same as a Kenta's, but the Koala boasts a much better Crit Ratio than the Kenta, which is what gives it an edge in terms of damage dealing.

In the end, the Koala must be viewed as more of a novelty pet with a unique skill set, decent damage, and a symbol of the eternal grind of [Ursa Caverns|Ursa].

It is one of four pets in the game that doesn't require taming (the others being the Ice Maiden, the Joker and the Abomination). 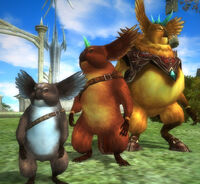