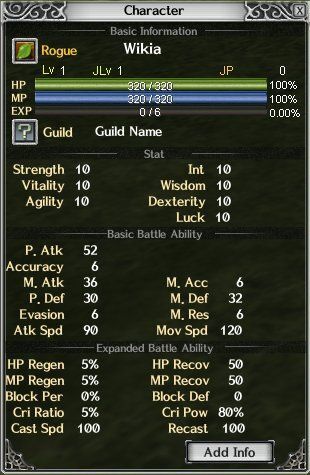 Most of the basic stats and abilities can be viewed via the (hotkey C) Character window.

Basic stats increase as you increase your character's job level however, you can also boost them by equipping accessory items or a regular item that has one or more soul stones socketed in it.

Each ability is derived from the 8 basic stats via a simple formula. Certain equipment, skills and buffs may also directly affect an ability.

Study this section and especially the Ability vs Stat Table to help you plan how to best build your character for a given task.

An important stat that can easily be overlooked is your character's level (Lv). There are 7 basic stats although one could argue that a character's available HP, MP, JP, EXP, stamina and even rupee are also "basic" stats.

Stats and abilities can be improved with Soul Stones. 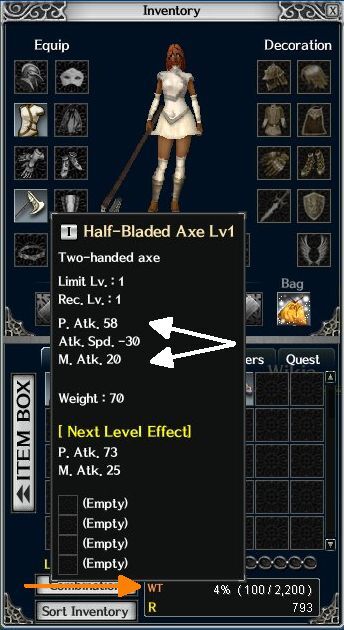 There are basic abilities and battle abilities but no real distinction is made other than how they happen to be grouped within the (hotkey C) Character window. Strike abilities and defense abilities are just two subsets of all abilities mentioned in this section.

MaxWt is viewable in the (hotkey I) Inventory window.

If your character is equipped with a bow or a crossbow then the displayed P.Atk is calculated using a formula for Ranged P.Atk. Otherwise a formula for Melee P.Atk is used.

At each new job level your character may see an increase in any of the 7 basic stats. The pattern of increments is different for each job in the game. Study the Races and jobs links in the nav bar at left and especially note the table of "job level bonus stats" for each job. Familiarizing yourself with the job level bonus stats may be helpful when you are deciding how best to spend your disposable JP. Sufficient to say that:

Consider the case of an Asura character progressing from Stepper to Strider to Assassin to Slayer. Do not confuse your initial trainee title - stepper (or guide, or rogue) - with your first job. Those initial titles merely reflect your choice of race and are not your first job. (See also: First Class Transfer)

The opportunity to overbreed is an option whereas the job level transfers are an unavoidable part of progressing to the next higher job(s) available.

However, a pet that is equiped on your character's belt, cannot be summoned and does not gain experience from killing monsters.

All Abilities are derived from the basic stats plus any equipped items or acquired skills that directly boost one or more of the abilities. Some items and some buffs negatively affect an ability.

Some buffs modify one or more abilities for a period of time. Buffs may come from consuming certain items (potions, scrolls, etc.) from a self-buff skill that you cast on yourself or from a buff spell that another player (or creature) has cast on you.

Six of the basic stats can be boosted by equipping an item with soul stones socketed in it. The Half bladed Axe pictured above has four (Empty) boxes where soul stones may be socketed to boost Str, Vit, Agi, Int, Wis or Dex.

Most equipped items directly boost one or a few specific abilities. Some accessory items (rings, earring, necklace, mask, cloak) are specifically designed to boost one or more base stats. Of course, any derived Abilities also benefit. The formula for deriving each battle ability is discussed next.

For those abilities that are not affected by any of the basic stats, examine your character's skill tree. You should find a passive skill or an active skill that does boost the ability of interest.

So we have 8 basic stats that affect 26 derived abilities. We also have a few other sources that contribute directly to one or more abilities:

In the formula and tables that follow these are abbreviated to Equip, Skill, Buff. So when you see Equip referenced in the first formula for MaxHP then you should be thinking of the sum total MaxHP contribution from all equipped items for your character. Likewise for Skill and Buff.

Fortunately the equations describing how each stat contributes to each ability are not very complicated. Simple multiplication and addition is all that is required.

If mathematical equations make your eyes glaze over then skip the Formula section and jump to the Ability vs Stat Table.

So first we'll list the formula and then we'll show exactly the same information in a table form. Some people relate to one better than the other.

If mathematical equations make your eyes glaze over then skip this section and jump to the Ability vs Stat Table in the next section. The Japanese wiki site via AlizarinHQ[2] deserves credit for determining the initial formulae.

With the following table you should be able to scan the column headings to find a basic stat and then very quickly see which abilities that stat affects. Alternatively, scan down the first column to find an ability of interest and you should quickly see which stats affect that ability as well as the relative weight of each one. The "weights" are the numbers and fractions in the table cells. (Updated for Epic 7)

Attack speed is not directly proportional to the number of Attack Speed ability shown on character status window but is it bound to several plateaus.

The Attack Speed Plateaus had been reworked since Epic 9.6, the new Values are as follows:

That effectively says that there is no plateaus anymore. The old (pre Epic 9.6) plateaus were:

Numbers from the old Plateaus:

Note:Ranged Plateau Sheet has both bow and crossbow plateaus combined and so there are minor differences from the 4th to the 12th attack speed plateaus which are not mentioned above (negligible differences).