The Stone Golem seems to be a rather decent pet! The unity is the same as Yeti being Pdef, but being a higher tier pet it is at a much higher value. Some players have stated that the Golem might be able to tank under specific circumstances, although it would most likely be forced to tank in a simlar manner as an Angel, with all the shortcomings associated with this method...

Comparing to Ifrit, a Golem can take much more damage but can't deal as much damage or heal like an Ifrit due to his low intelligence, so he is good as a secondary pet that can heal and give an accuracy buff. A staged Golem can be perfect to duo with a Cerberus.

Gear: Golems should be similar to an Angel or White Dragon, Warrior armour coupled with a 2handed Staff or Mace. If the golem isn't expected to take very many hits, it can be equipped much like a Red Pixie, Ice Maiden, or Naga, with a 2handed staff and a Magewall.

Stones should follow a similar build to Angel and WD in this area too, mainly Int and Vitality stones. Int stones boost the Golems attacking skills and healing ability, while Vit stones increase it's hp and defense. If the unity and natual vitality prove to make the Golem sturdy enough, Matk or Crit ratio stones may be used to get the most damage out of the Golems atking skills. Matk stones will also boost the healing power if so desired. 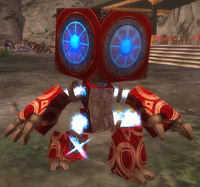 Retrieved from "https://rappelz.fandom.com/wiki/Stone_Golem?oldid=75826"
Community content is available under CC-BY-SA unless otherwise noted.