Asura Magician Master Class
Magician who has strong magic attack and give damage by weakness skill. It can attack multiple targets in efficient way, and also it resets cool time of all skills.

The expected role of a Void Mage is to DD. Mainly DD, although it also has buffs, it's DDing abilities put most classes to shame

Void Mage has always been a strong class and one of the best damage dealers in the game. The thing the Void Mage lacked were defensive stats, but with the addition of Devildom’s Nusylites and Fluminis set and the Yushiva belt, which make him immortal in PVE, he is now flawless.
Once you can tank Devildom mobs, the only thing you worry about is kill speed. Void Mage offers the best AOE damage and the void mage is therefore (once you can tank it) the best class in the game (PVE).

Mage wall + 1-hand staff gives up to +14% Int. (8% + 6%), 2h Staffs give a maximum of 84 Int. And since you are playing a Void Mage with a giant intelligence pool you always want to take percentage intelligence over flat intelligence.
1-h Staff + mw also has more cast speed than a 2-h staff.

The only thing the 2-hand staff can be praised for is being cheaper (only one awakening and you don’t have to enhance a mage wall on top of the staff).

I tested it with identical M. atk (1123,7), the only difference being, that one mage wall had percentage Int. and the other one percentage Wis. + M. atk., the Int. mage wall won (both mage walls were +25).

Optimally you want Crit. Power and/or Intelligence on your gloves and your armor and intelligence, reflex and movement speed on your boots. If you have the choice between 30 intelligence and reflex + movement speed on your boots, take the 30 int.
As I have already mentioned in the section “Why is Void Mage currently the strongest class in the game?”, the only thing you care about is damage output (once you are capable of surviving).

Crit./Int. or Crit./Int./Vit. or Crit /Vit. Depending on your situation. If you want to tank an entire room without Yushiva Belt Vit/Crit. Is good, but once you have the belt you are immortal, maximize your damage and go full int./crit.
Like seriously … if you died while wearing a belt you probably were away from keyboard or wearing buff equipment.

Speaking about buff equipment, you must use buff eq. The difference in damage is tremendous!
+15% M.atk. by using three “Heed of the Conjuror” parts and another 9% M.atk (on fire and wind spells) by using three “Spirit of fire” and “Tempest” parts.

You want to take 2x Int. (max. 50), M.atk. (max. 150), Crit. Power (max. 24,3) rings,
one or two Yushiva earrings, depending on how good you are at tanking. If you don’t struggle tanking an entire DD3 room, then only take one Yushiva earring and replace the other one with a Ruthless Navajo Earring (Level 150 M.atk. earring with crit. Power.).
For the Yushiva earring(s) you want reflex (max 20) and m.acc. (max. 100).
For the necklace you want to take a “Yushiva’s Blue Necklace” with Fire Additional Damage +5000

Fire skills (that you frequently use in DD3):

Air skills (that you frequently use in DD3):

Inferno Fire Arrow+Fire field and Maelstrom+Lightning Field balance each other out so we end up with:
Fireball, Fire Storm and Meteor Shower vs. Chain lightning, Splash Thunder and Heaven’s Breaker.
Fireball is only used against bosses and you only use Meteor Shower to pull Guardians.
So, Fire Storm vs. Chain lightning, Splash Thunder and Heaven's Breaker.
You would think three skills win over one, right? You guessed wrong.
Fire Storm is a dot (dot=damage over time), for 9 seconds Fire Storm deals a certain amount of Fire damage.Each time a seconds passes not only Fire Storm deals damage, but also the necklace with additional Fire damage. Splash Thunder and Heaven’s Breaker make each up for one tick, so we end up with 7 ticks from Firestorm vs. Chain lightning and there is no way you activate Chain lightning 7 times until Fire Storms is activatable again, especially not if you consider, that you are almost constantly using Dark Spiral.
When choosing which necklace a class has to use, the only thing you look is the frequency at which a skill is used and if it’s a dot or not.

You want to take Intelligence over M.atk. when awakening your weapons. VM scales so well with intelligence, because of Crystal Aura and he gets percentage intelligence everywhere, his mage wall, his staff, his bag, his belt pets, his frags, …
80 awakened intelligence will serve you better than 800 awakened M.atk.

Mephisto, Crystal Golem, M. Hector, Obsidikar, Sand Lord Kynish, Yushiva, Crustalino
If you are incapable of tanking an entire room but have or want to and exchanging your Intelligence soul stones with Vitality is not enough then you must exchange these boss cards one by one until it works. You can tank the entire DD3 room with mediocre gear and without a Yushiva Belt, if you go full Vitality and take a Yushiva, Obsidikar and Crystal Golem Card, you will lose a lot of damage but your HP pool will be so huge, that you are not going to instantly die once you get stunned.
A lot of people have the problem, that they could tank the entire room if it was not for the stuns, because they can’t abuse “Sadism” while being stunned.
By having a HP pool large enough to survive one or more stuns you can just life steal everything back afterwards.
As your gear grows you can steadily reverse the boss cards and vitality soul stones until you can tank an entire room with full damage gear.
Take Sand Lord Kynish if you are not a fan of Obsidikar, the Giant growth effect is almost always active due to all the AOEs.

Why no Chrono Shift?

You don’t need this skill, because once your CDR. passive is maxed out, you have your +24 helmet and you have good skill cards you can non-stop use Dark Spiral and therefore every other spell (due to Time Lapse). This only works if you tank the entire room, but if you are not then you are doing something wrong. Always tank the entire room, if you can only tank half of the room without the Yushiva boss card then use the Yushiva card to tank the entire room (or any other boss card/ soul stone for that matter but tank the entire room!!!). Tanking the entire room makes your TP passive “Time Lapse” proc more frequently which enhances the kill speed tremendously.
Yushiva does not reduce your damage by 50% by the way, it’s more like 20%, but going from tanking 50% of the room to tanking 100% of the room will make up for that and you will clear the rooms quicker eventually.
The only time Chrono Shift is useful is when you are stunned at the very start of your Dark Spiral, but that can’t happen, because you always stun right before you use your Dark Spiral.

Your pet as a Void Mage is pretty much only there for the buffs and toggles it offers, so you want to use a healer (preferably a Dragon or Beast, so it’s a little bit healthier in DD).

You want your healer to have the following skills: Painful Aria, Master Devotion, Unity: Unicorn, and Drill Bot Relic, Kiss of the Goddess

Your pet needs a lot of M.acc. so it always hits “Painful Aria” on bosses.

As for Artifacts you want to take 2x Master Devotion, so you get +90 on all stats (excluding Luck).
Your pet does not really need super high M.atk. stats since your insurance is Sadism anyways. I can’t remember when I healed myself in DD3 (excluding Kiss of the Goddess).

You also want to use Windy Shackle (if you or your tank needs it on Kraken of Infinity + Yushiva) and Weakness Skin if you are in a group with at least one physical class.

You ALWAYS must have Deep Evasion, Spirit of Fire, Heed of the Conjuror and Tempest active (the last three with buff equipment!).
It is going to annoy you the first few times, but after some time you get used to it and it becomes a reflex, you don’t even think about it, you just do it and it boosts your damage tremendously.

TIP (This works for everyone who uses buff equipment):

After every skill you cast, you want to move (just go forward and back so it cancels each other out), that cancels the animation and it lets you change your equipment a lot faster without that stupid waiting time in between every buff.
(What I do on my Void mage: I always run against a wall in DD3 while buffing myself (I just non-stop press W or A/D depending on the wall, that I am running against).)

-Always, always, always focus all mobs on one point. You might think that pulling and killing 50% of the room is half as slow as pulling and killing 100% of the room, but you are wrong. If your Dark Spiral hits the entire room you can literally non-stop use it which increases the kill speed by a lot (you obviously want to use your fields, stuns and fire storm in between your Dark Spirals)

-Before every Dark Spiral you got to stun the focal point, so you do not get stunned the frame your Dark Spiral starts (that’s a real ks killer and tilter …).

-If there are some Guardians at two or more different locations and you can not focus them at one point without running around the room for a long time, what you want to do is bring all the mobs to the guardians that are more separated (but still both in AOE range), stay in middle of them and use Meteor Shower to on the Guardian(s) who are not in AOE range (always try to maximize the amount of mobs your AOE hits, if you have the choice between pulling in one or two Guardians, you always take the two).

-If there are some bloodies who are not in AOE range, you pull the entire room until all the bloodies are collected at on side of room, then you stun the melee monsters, run away from the bloodies, they are going to follow you, when they are standing on top of the melee monsters you run back into the focal point or if the travel distance is too large you stun again and run back.

-[This only applies to low-medium ks dungeon parties or if you are solo]
If you are at Yushiva and there are more Void Mages than Mercenaries (Even if there are 4 Mercenaries and only 3 Void Mages you want to do this) you pull Yushiva right between both Satanic Crystal Cores, so that your AOEs hit both Crystal Cores and Yushiva at the same time.

Void Mage is expensive but worth it. Going from mediocre gear to good gear is a bigger jump when playing Void Mage than with other classes. This class is not very beginner-friendly since you need pretty good gear to be able to farm efficiently and tank the entire room.

[Tables of the weapons that are preferred by the job; one sub section per type]

this with full belt 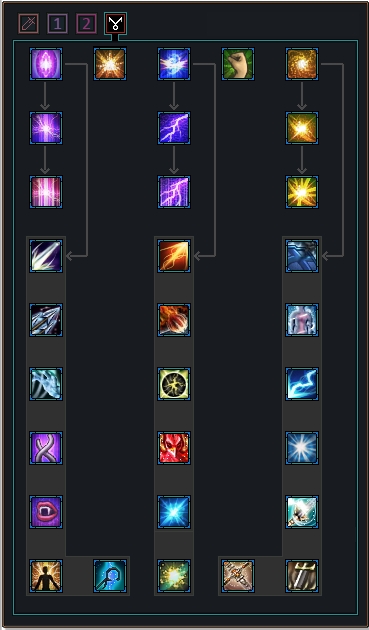 Retrieved from "https://rappelz.fandom.com/wiki/Void_Mage?oldid=72011"
Community content is available under CC-BY-SA unless otherwise noted.