Yeti are pure tanks, and focus on P.Def and Vitality. They have a defence-based Unity which further enhances their tanking ability because it reduces physical damage taken. As can be expected however, their attacking ability is rather low, so it can not be considered a DD in the same way a Skeleton/Wolf/Orc can, even if skilled to maximize damage output.

Bear in mind that a yetis' threat-generation is a factor of its' p.atk (when using the Threatening Essence toggle) and that all of its skills have a positive threat modifier so do not neglect its' p.atk. The yetis' threat can be controlled by a skilled player, enabling it to tank instead of a tanking character class in a dungeon party in the early stages of the game. If you're a damage dealing or healing class in need of a bit more p.defence, a yeti is a recommended pet. Yeti cards may drop from any monster or boss in the game. As always dungeons and hard mode dungeons a.k.a secret dungeons have higher chance of dropping items. 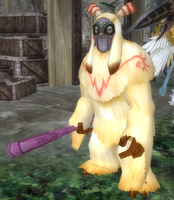 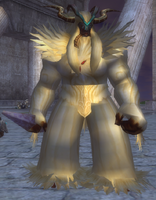 Retrieved from "https://rappelz.fandom.com/wiki/Yeti?oldid=75607"
Community content is available under CC-BY-SA unless otherwise noted.